As the sun rose enough to peek through the trees, she stopped what she was doing to admire the beautiful winter scene before her. Like glittering diamonds on a jeweler’s velvet, the snow sparkled with gleaming brilliance everywhere the sun touched. Even in the areas where shadows still held sway, the snow took on blue and purple hues, as if the darkness wanted nothing more than to join in on the glittery dance. For a moment she was completely enchanted, enjoying not only the perfect, untouched areas, but the heavy laden branches of the evergreen trees as they stood like stately women covered in white mink coats.

When she had trudged through the heavy mounds in the dark, her feet and legs numbing to frozen sticks the further into the forest she plowed, she had only seen the menacing black beyond her flashlight beam. Now, with the sun and sparkle, her emotions lightened exponentially as she continued to dig beneath the snow, no longer focused on the cold. Of course, once she reached the frozen ground, she knew she didn’t have the strength to break the mantle, but that no longer mattered. No one would find his body for months under all the glorious snow and by then she would be long gone. 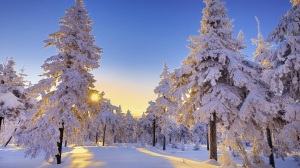 One thought on “A Winter Scene”