Afternoon sun seared the exposed skin at the back of her neck in much the same way that she had broiled the steaks the night before. Although Connie knew the sunburn she was receiving was going to give her a great deal of pain that evening, she couldn’t stop what she was doing. If only she had remembered to replace her wide brimmed gardening hat after the wind had stolen it away from her a couple months back, then she wouldn’t have been forced to wear his useless ball cap that only kept the sun out of her face. He, of course, would have reveled in her forgetfulness, pacing around the patio behind her, berating her endlessly for her stupidity.

That thought caused her to stab the trowel into the sandy soil with more anger than she thought she was still capable. After all, she had made her way through all of the stages and had come out the other side with a healthy amount of acceptance. That’s what the therapist had told her was the finish line.

“There are five basic stages of grief,” the therapist had told her with a matter-of-fact nod. It was that nod more than anything else that had convinced Connie that all she needed was to get through those stages and she would be okay.

“The first,” the woman continued, “is denial, which I’m sure you can agree you have already experienced?” The therapist’s voice had risen at the end of the sentence, as if it had been a question that Connie herself should have certainly agreed with, but then she continued talking without waiting for a response. “The second stage is anger, the third bargaining, the fourth is depression, and acceptance signals the end of all that misery. There are no steadfast rules or timetables for how you will work through all of these stages. Some may last longer than others, but I am here to help you work through them.”

Connie hadn’t actually gone back to visit that woman again. That therapist had had a look in her eyes that Connie had seen endless times before coming from her husband, Mitch. The one that said, “You’re dumber than a box of rocks, Connie Stanfield. If it weren’t for me here to clean up your messes you would be sniveling in the corner wiping your nose on your sleeve like the baby you are.” No, she was done with that look for good.

Setting the trowel down, she pulled her heavy gloves on again and taking as much care as possible, moved the prickly pear cactus back into position. It was difficult working the sandy ground, but she managed to get it into place without any serious scratching through her long sleeved shirt. Wiping the beaded sweat from her forehead, she picked up the ground cover plants and tucked them in around the base of the cactus before filling in the rest of the soil. Her sense of accomplishment swelled as she looked around at all she had done since beginning that morning shortly after dawn.

“How’s that for not being a sniveling little baby?” She muttered, moving her kneeling pad down the line to continue the planting.

Of all the stages, anger had been the longest and hardest to get through; not unlike the sandy and somewhat rocky soil she had been digging in all day. In fact, since the night that Mitch announced that he was divorcing her, she realized that she had danced back and forth between the various stages and anger on multiple occasions. An emotional waltz that had left her at times begging him to reconsider and at others curled up under her covers in tears and misery, only to swing back around to such seething hatred that she was certain steam must have escaped from her ears.

It was during one of the seething moments, when she couldn’t bear to hear one more nasty word come from him, that she had sprinkled his steak with rat poison before then covering it with sauce. He hadn’t noticed a difference and had eaten with gusto, stuffing his face with the tainted meat and veggies. Connie had watched him as she slowly ate her poison-free food, thankful that he had stopped talking for once. Mitch had seemed to really enjoy his meal, at least up until the moment he began choking and blood had begun dribbling from his eyes. He had looked up at Connie with a pleading face, but was unable to put his voice to his request. Connie had smiled at him and took another bite of her steak.

Shaking her head slightly to disperse the gruesome memories along with the last vestiges of anger, she looked down into the hole before her. With a wry grin she pushed some soil over the dead face of her ex-husband and settled the last cactus on top of that. With a quick nod she thought, “acceptance is a beautiful thing.” 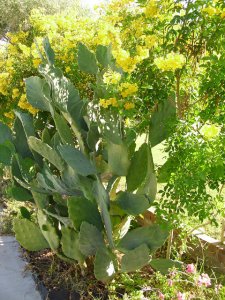 2 thoughts on “Working Through”

Marketing With A Story